INFORMATION
This travelogue is a retelling of my trip to England, Scotland and Wales from 18th – 28th July 2014. I tried to retell the trip as true to the original as possible with my memories, documents, photos, tickets etc., should there be any small discrepancies please have a look at this.

So you want to know more about how the tour through Great Britain went and how it changed me? Let’s go! On the following pages there is a lot to learn.

Our journey was completely unspectacular. Get on the plane in Hamburg, get off at London-Heathrow, turn the clock back an hour – done! But this was not the beginning of the longed-for relaxation on holiday but…the „Trolley Hike“.

First we went with the tube – the London version of the subway – to the station „Leicester Square“ where we picked up our London passport which we had already ordered from Germany in the basement of the tourist information. With the London Pass, one gets to many sightseeings of London for free or at a reduced price and has the advantage of not having to wait at some places but being able to walk past the queue. During our two days in London we visited Westminster Abbey, St. Paul’s Cathedral, Royal Albert Hall and Apsley House at Hyde Park. At a price of 85£ (at this time approx. 106€) for a two day pass per adult, the pass did not pay off for us, so you should check this beforehand and plan your sightseeing tour well in advance.

With the London Pass in one hand and the trolleys in the other we first wanted to get rid of our luggage! However, our B&B was in Wembley, so quite far outside, so we decided to lock all the stuff in a locker at Charing Cross station and only pick it up in the evening when we take the Bakerloo line to the B&B.

The whole thing should not be imagined as in Germany (locker open, suitcase and money in, locker closed), but a bit more complex. The suitcases were x-rayed by the armed and uniformed personnel, we had to that we do not carry any weapons or explosives with us and then the suitcases were disposed by treadmill in an inaccessible area.

We were freed from the trolleys and started to explore the city. First there was the classic photo on Trafalgar Square, as we were just there anyway. Afterwards we drove through the beautiful St. James Park, which is teeming with grey squirrels and pelicans and has much more nature to offer, to Buckingham Palace.

In the St. James Park I had my first experience with sandwiches. We passed a kind of snack car stuffed with triangular plastic packaging. After we had selected 100 different varieties from what we felt to be each one, the sceptical tasting started. My girlfriend at that time was not enthusiastic, my mother was not enthusiastic and I – I was also not…wait…I still eat them today from time to time! Okay, I was probably not quite so repelled by soaked, papery toast slices with cold egg and bacon 😉

Buckingham Palace or not

Since we missed the time for a changing of the Grenadier Guards in front of Buckingham Palace and didn’t want to wait, we walked through the Green Park directly into Hyde Park. The huge lake in the park has two names (The Serpentine & The Long Water) and offers with its „Serpentine Bar & Kitchen“ on the east shore a great location for a tea, coffee, something cold or a snack.

The round around the lake we did not finish completely, instead we crossed the bridge in the middle and went towards the park exit. Unplanned and therefore thanks to chance, we came directly from the park to the Albert Memorial, just opposite the Royal Albert Hall. The building is already impressive from the outside, but as we had free access to a guided tour with the London Pass, we stumbled directly into it.

The architecture of the building itself and the dome in particular is amazing when you consider how old the building is. The acoustics of the hall are said to have been unbearably bad for many years, but this has been fixed in the meantime and nowadays there are daily shows, concerts, basketball games or the like in the hall. The tour was really quite interesting and explained many of the historical details of the building, the statue opposite and the story of Prince Albert and Queen Victoria.

Since it was already quite late and we were all quite broken we decided to go to our B&B and have a look at the rest of London the next day. So back to the station „Charing Cross“ and our suitcases freed from the luggage jail and then into the Bakerloo direction Wembley Central Station.

There arrived immediately a queasy feeling made itself broad with us all, because Wembley is apparently none of the model districts of London – amusement arcades, prostitution and barred windows welcome one directly with abandoned the railway station – rolling suitcase pulling we made ourselves on the search for our B&B the euro hotel Wembley which I can recommend really nobody further.

Halfway we finally found something we’ve been looking for all day – „The Phone House“! Quickly two SIM cards were bought for the two mobile phone addicts. The SIM cards were not primarily intended for Facebook and other users, but for us to be reachable under English number and to be able to contact each other via Google etc. I couldn’t find shelter.

Arriving at the B&B we were in for the next shock – the place was incredibly run down! Thin walls were in place everywhere to accommodate more rooms in the house and in the foyer there were three televisions with sports betting in front of which people were busy gambling. I had booked a single and a double room, but that was unfortunately no longer available, we then got a room with 4 (!!) beds in it according to the laws of physics only 2 would have fitted, because the room had about 9 m² + a shower with 1.5 m². The windows were barred and covered from the inside with cardboard and a table fan screwed to the wall swirled the stuffy hot air.

Thanks to the tiredness we slept like stones and the next morning in the light and without the dubious people on the streets the district looked quite aunders. Since the suitcase of my girlfriend at that time had given up the ghost (Rolle kaputt), we went first of all and bought a new one. The new case was quite cheap, but made a stable impression. On the way back to the B&B to repack, a nice gentleman recommended us a café where we could have a good breakfast.

The three of us went to Flannery’s Bar where we really had an excellent breakfast! My mother discovered her fondness for porridge with fruit or honey and I met my new lover – the English breakfast!

With a full stomach and a freshly repacked suitcase we went back to the city with the tube. The suitcases arrived for another day in prison at Charing Cross station and we started the tourist program of London by visiting Westminster Abbey.

Even though I have little to do with church and religion, I liked the church very much. But I have always found churches fascinating as buildings. I think that much progress in the field of engineering and architecture, without the will to erect a monumental monument to any god on earth, would not have taken place or at least not so quickly.

What I also liked is the Tomb of the Unknown Soldier, a memorial dedicated to all those who died in the great wars of this world. The tomb is located in the central nave of Westminster Abbey, so that everyone – including the royal family and other noble families – must walk around the tomb as a mark of honour. The deceased unknown soldier was buried beneath the black marble slab in the earth of French battlefields.

From the church we went straight on to the Palace of Westminster and Big Ben, but we left the parliament behind and crossed the Thames over the Westmisnter Bridge to have a view from the opposite bank to the skyline of Westminster – an amazing view! But we left out the completely overcrowded London Eye and preferred to get ourselves a coffee

Back on the northern bank of the Thames we walked along the water. Past the ferry piers and Whitehall Gardens we discovered the Embankment Café, a beautifully located café in Victoria Embankment Gardens where we settled for a break and tea. Since sightseeing makes me hungry, I ate fish & chips directly there and the stuff was good! Many reviews on the internet speak of bad food and unfriendly staff, I can’t confirm that at all and would recommend everyone to take a break on the incredibly beautifully situated outdoor terrace.

From the café we walked on to Temple Station and from there we drove to Tower Bridge – does that also belong to the London Touri repertoire? But why the railing of the bridge is painted in mint blue and not in e.g. iron grey will remain an eternal mystery to me. On the southern shore we had a drink at Café Paradiso and strolled through Potters Fields Park again with an incredible view to the skyline of London.

From the Tower Bridge we went by tube to the station Hyde Park Corner directly at the entrance of the Hyde Park (where we already were the day before), because there is the Apsley House that we had included in our list of things to visit. The Apsley House formerly housed the Duke of Wellington and is representative of the London townhouses of the English aristocracy at the end of the 18th century. The class difference and the decadence of the ruling class at that time can be seen very clearly here.

Since we wanted to see Stonehenge the next day, we had picked out a train connection to Salisbury in the meantime and since it was time we set off again to free our suitcases from captivity and catch our train.

Why we saw Stonehenge the next day but not visited and where we went instead you can read on the next page. 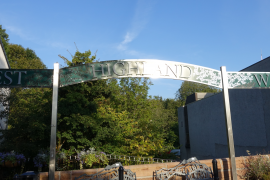 If the knees don’t want it, man shouldn’t force it! 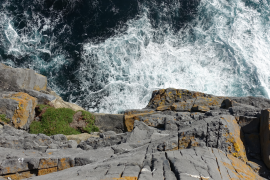