Today the Alster hiking trail had to be used again for a long Sunday walk. This time it should be the northern section from Kayhude to Poppenbüttel.

After I missed a big sight at my first section from Poppenbüttel to Jungfernstieg – namely the castle Henneberg or rather its replica – I definitely wanted to see it at the new route.

Alster hiking trail from Kayhude: off you go

So I took the train to Ochsenzoll and from there the bus 7550 to the stop „Kayhude, Heidkrug“. From there it is only about 200 meters to disappear from the road directly into the forest. Those who want to get refreshed before the hike can do this in the restaurant „Alter Heidkrug“ directly in Kayhude. The prices are moderate and the ambience is great. The food should be, according to the reviews, very good and a good friend who lives nearby confirms this.

But I wanted to eat only at the end of my hike and passed by the old Heidkrug. A few metres later, yellow arrows on a tree revealed the entrance to the Alster hiking trail. In general, the path, which is also part of the Via Baltica pilgrims‘ path, is well signposted, so that you can easily find it without a map, compass or smartphone.

I have to say that I have never been so fast on any of my day trips around Hamburg! What I mean by inside is the point where you forget that you are near streets, houses, shopping malls, etc. and just surrender to nature and enjoy the moment. The green, the fresh air, the chirping of birds, the rustling of branches, the blue sky and the sun!

After less than five minutes of leisurely hiking, you’ll come across the Alster. Here, about 10 kilometres from the source in Henstedt-Rhen, the Alster is still a small, leisurely flowing river 2 to 3 metres wide.

Every now and then one leaves the Alster through a bend in the road, but one never has to wait long until one meets you again and the splashing can be heard almost everywhere and always.

In the first part of the hike and for most of the rest of the way you are in the FHH area „Alstersystem bis Itzstedter See und Nienwohlder Moor“. The EU directive for FHH areas is also called the „Fauna-Flora-Habitat Directive“, which, like directives for nature conservation areas, is a very strict set of rules for the conservation and further modification of areas. Those who are more interested can inform themselves about the directive 92/43/EEC at Wikipedia.

Since the Alster system is to a large extent a quarry or floodplain forest, there are often fallen trees whose roots and branches provide shelter and habitat for many small forest dwellers.

Water plays a special role on this section of the Alster hiking trail, and not only because of the river that gives it its name. Again and again you come across small ponds, pools and lakes. Sometimes so hidden you almost fell in before you saw him. And no, I didn’t get it.

If the Alster here is crystal clear in most cases, the standing waters are exactly the opposite, presumably because man of nature here as little as possible messes with crafts. Plants grow abundantly on and in the water and the surface, reminiscent of a layer of algae, reveals a variety of life, not like the dead bathing lakes in and around Hamburg in summer.

I like the enormous variety of the hiking trail very much. Silent almost mystical forest, flowering and green meadows and water in all its forms alternate again and again. Especially on the first two thirds of the way you rarely see man-made things. Only overflying airplanes remind you every now and then that you are right next to a city of millions.

Food, not only for the soul

After about 14,000 metres for the legs and just as many impressions for the eye, one comes to a guesthouse that is located directly on the hiking trail and has a beautifully situated summer terrace. Because I only had a short breakfast until then and only one apple and two cups of my obligatory broth on the way, it was absolutely necessary to stop for a bite to eat! However, I would have probably also gone for a drink without hunger, only to observe other hikers from the summer terrace.

What can I say: The food was great, the staff was nice and the prices are quite ok! I can therefore recommend the Quellenhof without reservation.

After the very rich refreshment in the Quellenhof I was quite happy that I only had to walk about four kilometres to the end of the tour in Poppenbüttel. But on this section two more highlights await the hiker.

On the one hand one passes the Mellingburger and the Poppenbüttler locks, both part of the Alster locks, and on the other hand, directly behind the Poppenbüttler lock, there is also the replica of the Henneburg mentioned at the beginning. The site is unfortunately not open to the public. The small excursion for a look at the castle and a photo are worthwhile nevertheless.

A few metres later, one is already in the middle of the city again, only a few metres away from the S-Bahn station Poppenbüttel. If you want to continue walking along the Alster hiking trail, you can do this on the southern part. I recommend reading my description of the hike from the Alstertal to the Fernsicht.

Have you already walked the northern part of the Alster hiking trail? Do you have further tips or have I forgotten something?
Sue me for that in the comments! 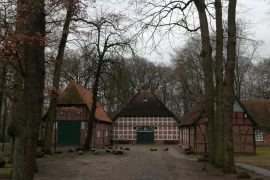 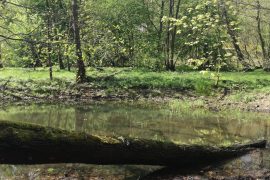